We all know that Windows 8 is already finalized and will be available from October 26 this year in market, and next work of Microsoft just after releasing Windows 8 is to start the next generation Windows development. Yes Microsoft started working on the Windows 9 as we can say just like Windows 7 and Windows 8. 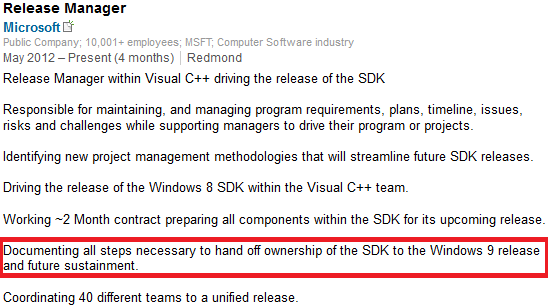 According to MsftKitchen, several Microsoft Employees profiles and on other locations on web news regarding Windows vNext was found. Windows 9 was found as Skills & expertise of an employee of Microsoft. And even there was a bit of news about Windows.next and Windows vNext which was being referred by some of the employees on web.